In many countries, cannabis is widely used as an anesthetic and to treat serious diseases, as well as to create a highly profitable business. Ukraine has just started moving in this direction.

"The body is so twisted that there is not a second of rest. Medical cannabis relieves this very well. Moreover, it doesn't have the same side effects as morphine," Sokolova said.

She took the drug in the form of an electronic cigarette that burned a mounted capsule filled with medical cannabis oil. Such a cigarette lasts for three months, and it costs $25, which is cheaper than morphine or a fentanyl patch (a drug containing opiates). Such a patch costs several thousand hryvnas and lasts about three days.

Morphine, if dispensed at a hospital, is received free of charge. But patients have to pay for it after being discharged. A morphine capsule officially costs from UAH 50 to UAH 100. However, to buy this drug even with a prescription is not easy. Unofficially, one capsule can cost as much as $200.

Sokolova’s ordeal and experience are perceived handled differently in different countries. In some, treating conditions, like pain, with cannabidiol (CBD) is a common, even trivial matter. In others, particularly in Ukraine, it is a crime or at least an administrative offense. In the near future, everything could change. Ukraine’s new parliament is likely to consider a bill on the resolution of medical cannabis this fall. 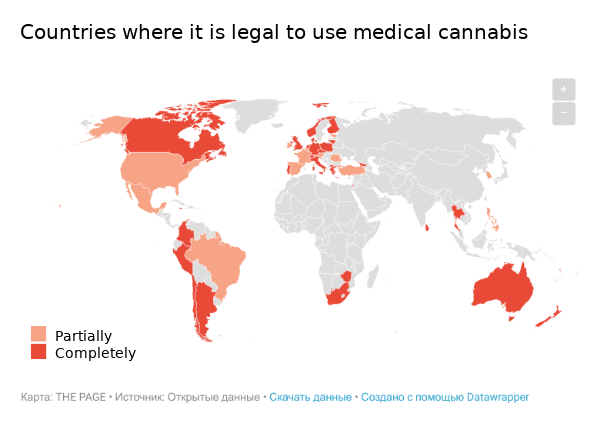 Attitudes to cannabis in the world are changing rapidly. This is recognized even by the World Health Organization (WHO). In January of this year, it sent its recommendations to the UN Commission on Narcotic Drugs, which can significantly change the entire global cannabis industry. WHO recommends that cannabis and its resin be removed from the list of highly hazardous substances that have no therapeutic value, from 1961 Single Convention on Narcotic Drugs.

This recommendation does not apply to all cannabis and its derivatives, but only to those which have medical use. We are talking about drugs containing cannabidiol (CBD). This is one of the substances that can be extracted from hemp. This is what Sokolova during when she was being treated for cancer.

In its letter, the WHO profile committee wrote that there is no evidence that the cannabis plant or its resin causes the harmful effect inherent in other substances from this list. But CBD-based drugs have potentially therapeutic value. They can be used as a painkiller, used to treat epilepsy and multiple sclerosis.

The UN Commission will not consider this issue before 2020. But this does not prevent individual countries from allowing medical cannabis. Now there are 34 of them in the world. Among the European countries close to us are Poland, the Czech Republic, and Germany. More than 14 countries have already partially allowed it. 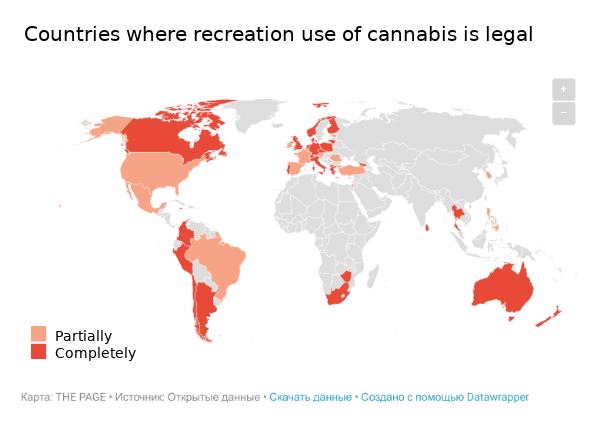 At the end of May, parliament registered draft law No. 10313 "On Amendments to Certain Legislative Acts of Ukraine regarding the guarantee of the fundamental human right to life." One of the measure’ co-authors, Oleksandr Opanasenko, says it would allow the storage and use of medical cannabis by prescription. Also, patients would be allowed to grow up to four bushes of medical cannabis for their own use.

The draft law proposes issuing a license to entrepreneurs for growing this crop. For those who plan to cultivate up to 1,000 plants, it will cost about UAH 200,000 per year. And for each hectare of sowing in the amount of more than 1,000 plants, the license-owner will have to pay about UAH 1 million, according to the draft bill.

The license will allow the cultivation of cannabis varieties containing small amounts of drugs for five years. For cultivation for scientific or educational purposes, permission is not required.

This initiative has many supporters, including the Ukrainian Health Minister Uliana Suprun.

"About two million patients could improve their lives with medical cannabis. Secondly, we are lucky that we have such a fertile land and agriculture is developing. We, probably, would quickly be able to become exporters of these raw materials and quickly find a market," she said.

Suprun, however, noted that, in addition to the bill, it was also necessary to amend some decisions of the Cabinet of Ministers, adopt a protocol on medicines that will have cannabis content, and dosages, as well as issue licenses for pharmacies.

The National Police of Ukraine support the use of medical cannabis in the form of medicines and on the basis of a medical prescription. At the same time, in the document sent to parliament, National Police Chief Serhiy Kniazev said the bill requires improvements. Otherwise, its adoption may lead to legal conflicts and inconsistencies with legislative acts regulating the sphere of trafficking in narcotic drugs and psychotropic substances.

The fact that even the police are not against the legalization is not surprising.

The bottom line is the bill would provide access to medical cannabis, not total legalization, says Yaroslav Matiushyn, a spokesman for the Democratic Sokira Party, which supports the measure. He notes that passage of the law would not bring about the complete legalization of marijuana.

"The majority of people perceive legalization as a kind of initiative, so that everyone can smoke a joint behind a garage. Medical cannabis is, first and foremost, a medicine," he said.

Not everyone agrees that such a bill is necessary. Olha Bohomolets, chairman of the parliament's health committee says opening up access to medications containing medical cannabis requires only changes to the decisions of the Cabinet of Ministers, making legislative initiatives redundant. According to her, the permission provided by the bill for cultivation and research "opens the gates to create huge super-profitable business."

At the same time, Oleh Primakov, head of the marketing department of the Institute for Bast Fiber Crops at the National Academy of Agrarian Sciences in Hlukhov, Sumy region, says that it is impossible to manufacture narcotic cannabis from technical and therapeutic hemp plants.

Cannabis business is booming abroad. The influential British newspaper The Financial Times already publishes financial indicators for the industry. Over the five months of this year, investments in cannabis exceeded in terms of indicators investments for the entire 2018 and reached $1.3 billion. The market, according to forecasts, will reach $14.9 billion.

Companies are immersed in the cannabis industry.

In March last year, the investment subsidiary of one of the largest bank subsidiaries of Bank of Montréal, Nesbitt Burns, bought Cronos Group for $100 million. In April of the same year, JPMorgan Asset Management invested $133 million in marijuana maker MedReleaf. 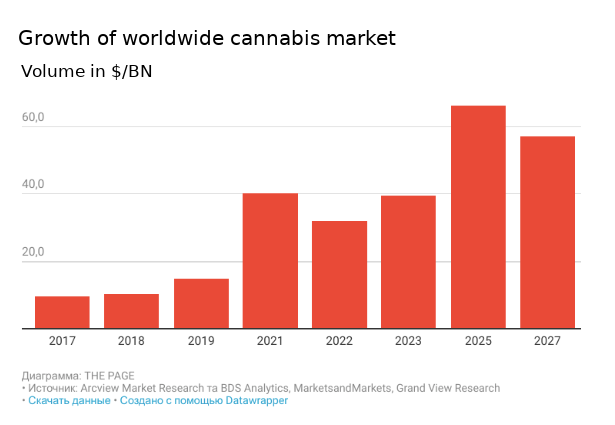 The cannabis market has rocked stock markets. Canadian company Tilray, which grows marijuana and legally supplies medical cannabis in the EU, last July held the first ever public offering of shares (IPO) on the Nasdaq stock exchange. The company placed 9 million shares on the market at a price of $17 per one share, attracting about $153 million.

The New York Stock Exchange and Nasdaq in 2018 included two Canadian companies producing cannabis, Canopy Growth and the Cronos Group, on their lists. Shares of Cronos last year rose by more than 115%, and Canopy — more than 65%. This has made the world's last biggest cannabis player. Its market value is $15 billion. The company's revenue in 2018 was $120 million, and in 2019 it is expected $ 170 million.

Ukrainian farmers are already preparing themselves to make money on cannabis.

The owner of Agrospetsservice, Oleksander Kryvenchenko, now supplies Ukrainian farmers with agricultural equipment from the United States, but if the parliament supports the bill, it is ready to invest about $200,000 to $300,000 in medical cannabis.

"Our American colleagues tell us they spend around $100,000 on tenth of a hectare. But here it is still necessary to take into account that the level of remuneration there is completely different. You can save a lot on this," he said.

Kryvenchenko is ready to sell cannabis on the domestic market, as well as export it abroad. According to his calculations, it is possible to return to payback after 36 months, but this is on condition that there are no additional taxes, duties and excise tax.

However, from a legislative point of view, things are not so simple. American Andrew Kinsel, who is engaged in the cultivation of technical hemp in Ukraine said there are a large number of requirements for this business, compared with Germany, the United States and Canada. According to him, before you start growing cannabis, an entrepreneur must submit documents for a quota in November, provide a certificate of good conduct, drug independence, and get permission from the police at the warehouse where hemp is stored. There are no such requirements in many countries, he says.

"The farmer must be responsible for what he has on the field, from where he has seed. Any complaints? Come and check if the seeds are plants that grow in the field and that are registered," he said.

Interesting Ukrainian market and foreign companies. According to Matiushin from Democratic Sakira Party, the fate of parliament draft law is closely monitored by the American company ParagonCoin. It deals with cryptocurrency, which is created for the circulation of medical cannabis, and advocates the use of blockchain technology for the legalization of all processes related to its production and consumption.

"They consulted with us. They have such ambitions that someday we still have a bill to legalize medical cannabis. They want to come here," he says.

Thinks about the cannabis business and Yanina Sokolova. She wants to produce electronic cigarettes, such as those that helped her overcome the disease. The presenter is already discussing this business idea with several entrepreneurs. E-cigarettes will be first produced using Polish technology. Raw materials will also be imported from the neighboring country.

"We will make it here, on the basis of Ukrainian money and Ukrainian resources, with our people and equipment. But we will first borrow the raw materials and the scheme from the Poles. Then we will try to make it in Ukraine," Sokolova said.

Ukraine's parliament will determine when this will become possible. If it passes the bill in the first reading, it will be discussed by the new parliament. If not, the bill will first have to be re-introduced.

"Sooner or later, it will happen," Opanasenko said.

Mistake in the text? Please select it and press Ctrl + Enter

The Ministry of Health has expanded the list of "red" countries: what are dangerous to fly to

Ukrainian Roskomnadzor? The Ministry of Digital Transformation proposed to regulate the Internet